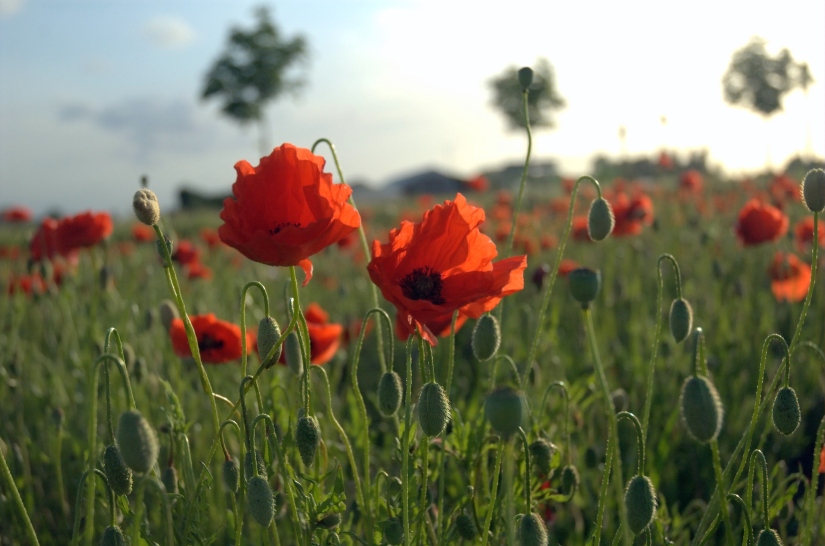 I happen to be teaching World War I poetry at the moment so today has taken on even more significance for me than usual. Here are some of my favourite poems:

‘Suicide in the Trenches’ by Siegfried Sassoon

I knew a simple soldier boy
Who grinned at life in empty joy,
Slept soundly through the lonesome dark,
And whistled early with the lark.

In winter trenches, cowed and glum,
With crumps and lice and lack of rum,
He put a bullet through his brain.
No one spoke of him again.

You smug-faced crowds with kindling eye
Who cheer when soldier lads march by,
Sneak home and pray you’ll never know
The hell where youth and laughter go.

No doubt they’ll soon get well; the shock and strain
Have caused their stammering, disconnected talk.
Of course they’re ‘longing to go out again,’ –
These boys with old, scared faces, learning to walk.
They’ll soon forget their haunted nights; their cowed
Subjection to the ghosts of friends who died,-
Their dreams that drip with murder; and they’ll be proud
Of glorious war that shatter’d all their pride…
Men who went out to battle, grim and glad;
Children, with eyes that hate you, broken and mad.

What passing-bells for these who die as cattle?
Only the monstrous anger of the guns.
Only the stuttering rifles’ rapid rattle
Can patter out their hasty orisons.
No mockeries now for them; no prayers nor bells,
Nor any voice of mourning save the choirs,—
The shrill, demented choirs of wailing shells;
And bugles calling for them from sad shires.

What candles may be held to speed them all?
Not in the hands of boys, but in their eyes
Shall shine the holy glimmers of good-byes.
The pallor of girls’ brows shall be their pall;
Their flowers the tenderness of patient minds,
And each slow dusk a drawing-down of blinds.

‘Back’ by Wilfred Gibson

They ask me where I’ve been,
And what I’ve done and seen.
But what can I reply
Who know it wasn’t I,
But someone just like me,
Who went across the sea
And with my head and hands
Killed men in foreign lands…
Though I must bear the blame,
Because he bore my name.

Bent double, like old beggars under sacks,
Knock-kneed, coughing like hags, we cursed through sludge,
Till on the haunting flares we turned our backs,
And towards our distant rest began to trudge.
Men marched asleep. Many had lost their boots,
But limped on, blood-shod. All went lame, all blind;
Drunk with fatigue; deaf even to the hoots
Of gas-shells dropping softly behind.

Gas! GAS! Quick, boys! — An ecstasy of fumbling
Fitting the clumsy helmets just in time,
But someone still was yelling out and stumbling
And flound’ring like a man in fire or lime.—
Dim through the misty panes and thick green light,
As under a green sea, I saw him drowning.
In all my dreams before my helpless sight
He plunges at me, guttering, choking, drowning.

If in some smothering dreams, you too could pace
Behind the wagon that we flung him in,
And watch the white eyes writhing in his face,
His hanging face, like a devil’s sick of sin,
If you could hear, at every jolt, the blood
Come gargling from the froth-corrupted lungs
Obscene as cancer, bitter as the cud
Of vile, incurable sores on innocent tongues, —
My friend, you would not tell with such high zest
To children ardent for some desperate glory,
The old Lie: Dulce et decorum est
Pro patria mori.

View all posts by Kate

This site uses Akismet to reduce spam. Learn how your comment data is processed.